Most theories of politics, in my view, are theories of content rather than of structure. Political philosophers are too keen to tell us what we should be discussing, rather than how we should be discussing it. For Marx, this is class; for MacKinnon, it’s the oppression of women; for Fanon, the way that colonialism constructs a kind of ‘double consciousness’. While this certainly makes for interesting literature, it also encounters an important constraint. Where do we go from there? What happens to politics once Marx has his communist revolution? What about MacKinnon, once we concur that the female episteme is submitted to the male?

That theories of politics will have an analytical center is inevitable—it’s just that, too often, this center is overstressed as an obvious organizing principle, with any other factors tossed in the ‘Not Important Enough’ pile. To me, Constant’s work stands out as a beacon of light in all this. Constant, quite frankly, doesn’t really give seem to give much of a fuck about what we’re discussing, as long as it’s done in the right context: strong liberal institutions marked by representation and eager political participation. This is what situates his work at the core of liberalism; Constant tells us we are free to say what we like, as long as we say it in the right way and collectively participate in politics to ensure everyone else can do that too.

Constant’s “Principles of Politics Applicable to All Representative Governments” encapsulates his concern with political structures perhaps better than any of this other works. The text, written in the highly tumultuous Napoleonic period while Constant himself was in exile, consists of a program outlining the necessary pillars for a liberal stability. Constant notes the importance of representative assemblies to “animate” the political body; the manner in which the law should couch the intrinsic rights of the individual; the primacy of local constituencies to keep citizens active in politics; the need for a neutral power to moderate the excessive energy of idealistic politicians. His disdain for revolution, which breaks the surface of this text occasionally, is similarly grounded in such liberal ideas. For Constant, revolution is a dangerous means rather than an end in itself. It is only justified when it aims to secure core individual rights not yet enshrined in a constitution. Once this structure is in place, then revolution is rendered unacceptable.

Understanding several contemporary political theories also requires us to understand Constant. Mair’s ‘ruling the void’ thesis, for instance, which posits the concurrent retreat of the citizenry and political elite in the West, is fundamentally ‘Constantian’. Constant was the first to, in his 1819 lecture on liberty, note the importance of the continuous return to politics by electors if we are to keep democracy afloat. We must not force political participation—that would be despotic—but actively encourage its joy, the sense of community it can bring. Quite frankly, if this isn’t liberalism, I don’t know what is. 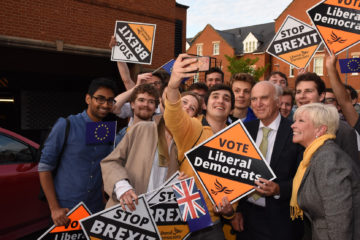